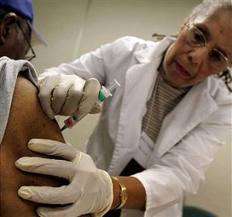 It won’t be long before flu season is upon us, and the U.S. Food and Drug Administration (FDA), has now approved the new 2012-2013 vaccines.

Each year experts study influenza virus samples and global disease patterns to identify virus strains that are most likely to cause the most illness during the upcoming flu season.

The H1N1 virus is the same as the 2011-2012 influenza virus vaccine but the H3N2 and B viruses are different from last year.

Vaccination remains the cornerstone of preventing influenza, a contagious respiratory disease caused by different influenza viruses infecting the nose, throat and lungs. This year’s seasonal vaccines will provide protection against the three influenza virus strains that global surveillance indicates are likely to be the most common strains circulating during the upcoming season.

While the there is no guarantee that the new vaccine will prevent people from getting the flu, the vaccine may reduce the severity of the illness or may help prevent flu-related complications.

The Centers for Disease Control and Prevention recommends that everyone get the flu vaccine before the flu season gets under way. Winter is usually considered the “flu season” but there have been reported outbreaks as early as October, which is only 2 months from now.

Who should definitely get the vaccine?

If you are sick with a fever when you go to get your flu shot, you should talk to your doctor or nurse about getting your shot at a later date. However, you can get a flu shot at the same time you have a respiratory illness without fever or if you have another mild illness.

We all know how quickly a cold or the flu can spread in a family. It only takes one member to start a chain reaction. Be vigilant about protecting yourself and your family by making sure that every member gets this year’s flu vaccine.